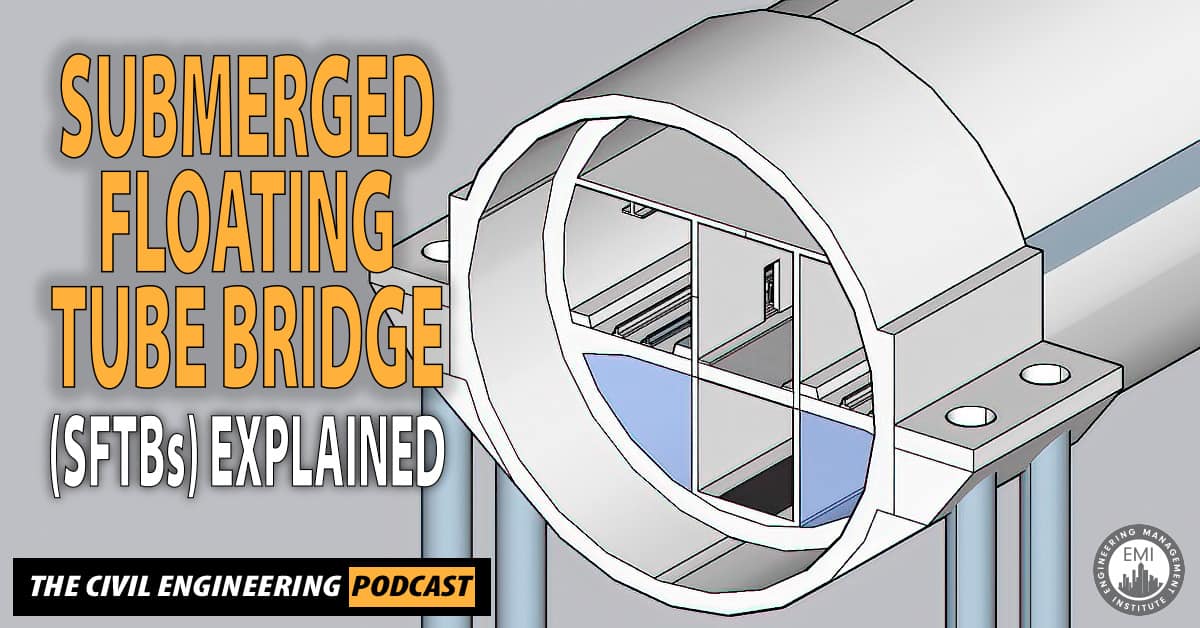 In this episode of The Civil Engineering Podcast, I talk to Professor Malcolm Chrisp, who is the Head of the School of Energy, Infrastructure & Society, at Heriot-Watt University. Joining him today are five of his master’s level students who have been helping him explore a possible Celtic Crossing, a submerged floating tube bridge linking Scotland and Northern Ireland. They are Eoin MacDonald, Dan Marek, Joel Meggs, Rory Saunders, and Gavin Mackay.

Here Are Some of the Questions I Ask Our Guests:

Here Are Some Key Points Discussed in This Episode About the Submerged Floating Tube Bridge Project:

Professor Chrisp is Head of the School of Energy, Infrastructure & Society at Heriot-Watt University. He leads a team of academics, researchers, and students on campuses in Scotland, Dubai, and Malaysia, tackling key problems defined by the United Nations Sustainable Development Goals. He is a civil engineer and has worked in industry and academia for over 35 years. We will include each of the student’s bios in the show notes of this episode.

Eoin MacDonald is a final year student studying Civil Engineering (MEng) at Heriot-Watt University. He has been a part of a wide range of multidisciplinary design projects that involve people from around the world. Currently, he is a member of a design group that is aiming to produce a report for the call for evidence on connecting Scotland and Ireland via a crossing across the Irish Sea.

Dan Marek is a Final Year Masters in Structural Engineering Student and co-founder of a cleantech startup. For this project, Dan was responsible for the design and layout of the structure and created graphics, renders, videos, and presentational materials to help communicate the concepts put forward by the team.

Joel Meggs is a well-traveled and focused Civil Engineering MEng Student, graduating in 2021. He is currently maintaining a 1st to fulfill the Master’s requirements. He enjoys challenges and meeting/working with people from different cultures, such as the 10 years he spent traveling around the world volunteering with his family and the five months he spent teaching in China. As a result, he has a passion for traveling overseas and sees his degree as a gateway to places where he can make a difference.

Gavin Mackay is a Civil Engineering MEng student at Heriot-Watt University, expecting a First Class degree. He has played key roles in a wide range of multidisciplinary design projects throughout his university career and is the president of his sports club.

This Episode Is Brought to You by ACI

Are you a member of The American Concrete Institute? ACI is a worldwide community of 30,000 professionals, educators, and students in more than 100 countries. It is the premier global community dedicated to the best use of concrete.

Starting on January 1 this year, ACI launched new member benefits. ACI members now have free access — through annual subscriptions — to all ACI University live webinars, free access to 260+ on-demand courses, and unlimited access to the Institute’s practices (including all ACI guides and reports) and symposium volumes.

ACI members push the concrete industry further by adapting to new technology and investing in their careers, and are dedicated to improving concrete design, materials, and construction. You do not have to be an ACI member to work in the concrete industry. If you want to exceed expectations in it, there is no better place to be. Whether you are a student just starting or have years under your belt, ACI membership ensures that no matter what changes the world brings, you will be prepared to thrive, and your life’s work will last for generations. Right now, ACI is offering a $30 discount on new Individual and Young Professional Memberships — student memberships are free! Join ACI today at concrete.org/PODCAST30.

Please leave your comments or questions in the section below on the submerged floating tube bridge project.