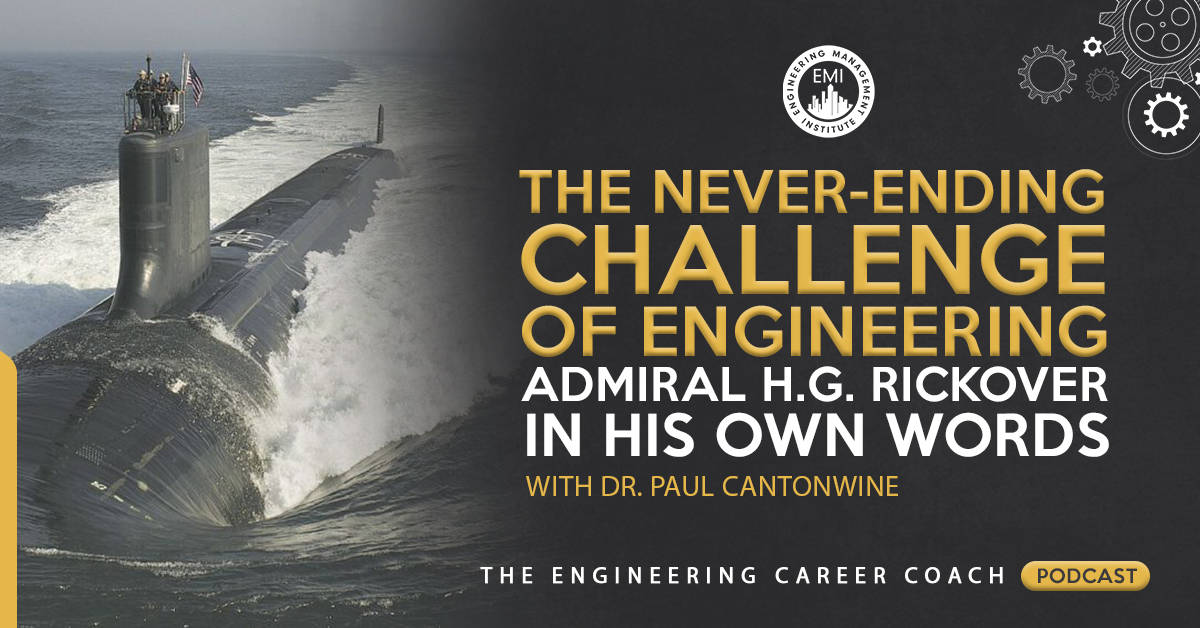 In today’s episode, author Dr. Paul Cantonwine talks about The Never-Ending Challenge of Engineering: Admiral H.G. Rickover in His Own Words, which is a practical and philosophical look at the principles used by engineers and leaders from the perspective of Admiral Hyman George Rickover – one of America’s greatest engineers.

Why Admiral H.G. Rickover is a model for engineers:

Education/training – He is an adamant educator. You have to love learning in order to innovate.

Three American innovators – He studied the lives of Benjamin Franklin, Thomas Edison, and George Washington Carver on how they overcame adversity to become successful innovators. Something in common with the 3 innovators is that they love to learn and they had to overcome many obstacles to develop their knowledge.

Technology’s impact on society – He was philosophical on how technology has impacted modern life but it is a gift people have to take care of.

A man’s purpose in life – He gave a speech about the importance of taking action. You can do all the learning and training but you have to take action.

“The great end of life is not knowledge but action.” – Admiral H. G. Rickover

More details on these in the episode…

In the Take Action Today segment of the show, Dr. Paul Cantonwine shares a tool that Admiral Rickover used to develop professionalism.

Excerpt from the book, The Never-Ending Challenge of Engineering: Admiral H.G. Rickover in His Own Words

“I can think of no better way to raise engineering to the highest professional level than by practicing it in such a manner that every side effect is carefully considered and nothing is done which might conceivably damage fellow citizens, especially those as yet unborn. In fact, I should like to see an engineering oath expressing this sense of responsibility. It might well be something like the ephebic oath sworn by all young Athenians when, at the end of two years of preparation and service, they become full citizens. Each of these young men—called ephebi—promised solemnly to leave his city ‘not less but better than he found it.’

A promise to leave his country not less but better than he found it would be a most appropriate beginning for an engineering career.” – Admiral H. G. Rickover

About our guest Dr. Paul Cantonwine

Dr. Paul Cantonwine was introduced to Admiral Rickover’s engineering philosophy in 1999 (13 years after his death) when he joined the Bettis Atomic Power Laboratory, which is part of the Naval Nuclear Propulsion Program that Admiral Rickover led for over 30 years. Prior to joining Bettis, Dr. Cantonwine received his B.S. in metallurgical engineering from Purdue University and a M.S. and Ph.D. in materials science and engineering from the University of Virginia. He spent seven years at Bettis working on fuel performance issues and developed expertise in the mechanical performance of zirconium alloys under both irradiation and post-irradiation conditions. He left Bettis in 2006 to join a commercial fuel vendor where he continues to work on fuel performance issues and is an internationally known expert on fuel channel performance in boiling water reactors.

Book mentioned in this session include:

Resources and links mentioned in this session include:

How would you emulate Admiral Rickover in your engineering career and life?